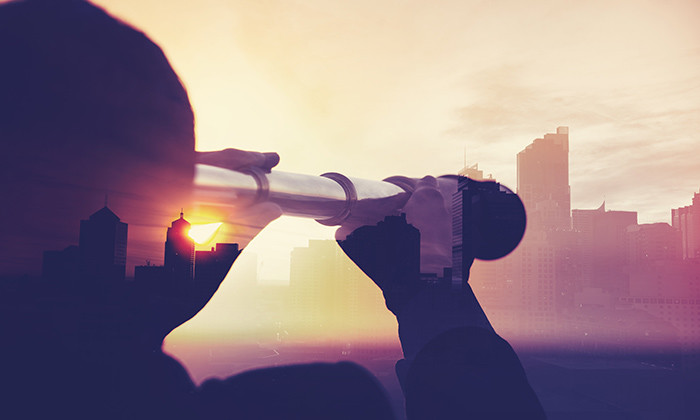 Vision -Why and how?

The term risk is most of the time equated with businesses. From the idea of a start-up to that of actually executing it into a successful business, there comes a million hurdles. Though there are a lot of things to ponder on and decide about the business, one of the most important once out of all turns out to be vision. Vision is the ability to foresee the future of your business by keeping in mind every possible trend that can take over your field of journey. It is deciding on a clear objective which focuses on both short term and long-term achievement.

In a start-up, the vision is to be made by the founder as they are the ones who would have the clear idea of where they want to take the business from just an idea. The vision need not be a very concrete one, however, it should have a proper plan. No matter how crazy or bizarre your idea sounds, if you have a concrete written down plan to execute this idea into success keeping in mind all possible turn outs, then there will be a high probability of getting your business on track.

Every major company right now started from an idea that had a vision. A vision into the future of the company, into what the company would do to the world, how it can change the current scenario and whatnot. You will have to paint a picture of what your company would mean to the world in the years to come or that how it stands out from the possible million other companies which promise to do the same things. However, more than just a picture, you need a plan. A plan to execute the picture into reality.

What is the importance of vision?

No successful company right now started off by saying that they have an idea and they’ll see where it goes as it goes. Every single successful company that human kind swears on in the current era started off with an idea that was imaginable only to them. It still sounded just like a dream to the rest of the world until it was made and used. As the person with that bizarre yet potential idea, you will have to decide where you want to take that idea to and how you will make it into reality. It is not just enough to think about providing for today. It is even more important to think of what your particular idea will do to the future.

The reason why vision is so important to the success of the business idea is that it is human nature do something only if they have a reason for it and vision does exactly that. It gives your idea a purpose that goes beyond just finance. Finance becomes just a good side effect to executing that idea for a much larger cause. Vision is the reason why you should think about growth or making your company be on the map.

Tough times and hurdles in a business are completely inevitable. They will come and they might go according to your response to it. However, when you have a vision, you have a reason to actually break those hurdles and move forward rather than stop and say you couldn’t do something because something came up. Then that something that came up is given more priority that your business in itself.

When we talk about a start-up and recruiting for it, there is a dilemma faced. You probably have a novel business idea but the people that you need to work for you might have to do the same job as that of many other successful companies. When recruiting for your company, you won’t be able to provide the salary package or incentives like the successful companies so the only thing you can provide the employees that make you stand out from the rest of the top leading companies is your vision. Established companies have already set their vision and is known by all. Your vision can be something completely out of the box throwing off all of those other companies. Give them more than just a reason why they should work for you. Give them an opportunity to be a part of something huge in the future.

How to communicate the vision to your team

The majority of the people will have a reaction to your idea which will make you look like a crazy human for even just dreaming about it. Only you would know how exactly your thoughts could be put into practice and be made something huge. However, if all of these are only possible inside the mind of yours, we have a problem. Along with all the people who think you are out of your mind for your idea are also the people you would want to work with. Communicating your vision in a compelling, enticing and captivating way to such an extent that they understand and decide to be a part of it is key.

The source, the message and the receiver are the three main parts of any basic communication. Even if you aren’t the most talented orator out there, there still is a way to communicate your idea to your potential employees. For this, you will need to lay out your plan in your mind in a very detailed manner. Only then can you pick them out individually and explain it to anyone in a simplified manner. If you offer a realistic experience that is not available elsewhere, chances are people will buy it.

You need to state your idea so aesthetically that by the time they leave the room, they have a very detailed picture of your idea drawn in their own mind and is there to stick. This picture should be the image that appears when in contact with any problems or hurdles. That picture alone should serve as motivation to move forward. For a picture to be painted, it should be realistic enough to believe in it and have trust in it. To communicate all of this effectively, you should have a clear-cut idea of all possible outcomes, the problems, the potential breakdown points and the change this whole idea can bring in to the world. Once you have clear idea, it can be communicated in a simple manner to anyone around you with a solution for every imaginable problem as you would have thought about all possibilities within this realm. It’s time to rethink the vision for your company for years from now.